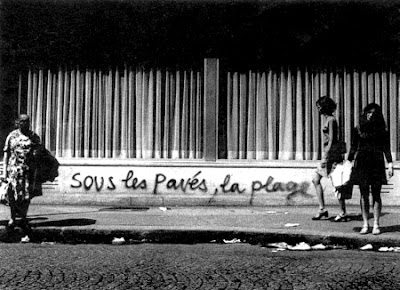 "The wealth of those societies in which the capitalist mode of production prevails, presents itself as "an immense accumulation of commodities,” its unit being a single commodity. Our investigation must therefore begin with the analysis of a commodity." Karl Marx, Capital I.
"In societies where modern conditions of production prevail, all of life presents itself as an immense accumulation of spectacles. Everything that was directly lived has moved away into a representation. " Guy Debord, The Society of spectacle.
"The images detached from every aspect of life fuse in a common stream in which the unity of this life can no longer be reestablished. Reality considered partially unfolds, in its own general unity, as a pseudo-world apart, an object of mere contemplation. The specialization of images of the world is completed in the world of the autonomous image, where the liar has lied to himself. The spectacle in general, as the concrete inversion of life, is the autonomous movement of the non-living." Guy Debord, The Society of spectacle.
Definitions: SI 1958
constructed situation
A moment of life, concretely and deliberately constructed by the collective organization of unitary environment and the free play of events.
situationist
Relating to the theory or practical activity of constructing situations. One who engages in the construction of situations. A member of the Situationist International.
situationism
A word totally devoid of meaning, improperly derived from the preceding term. There is no situationism, which would mean a theory of interpretation of existing facts. The notion of situationism was obviously conceived by anti-situationists.
Posted by Taina Rajanti at 06:10